I had a wonderful night in Independence. I highly recommend the Mt. Williamson Motel and Base Camp on the south side of town. Very hiker-friendly (even sell Mtn House dinners) with nice quiet cabins. I was very happy there.

It’s a terrible picture of the motel, but I think that peak is Mt. Williamson.

I could have stayed there for my entire town time, but I needed a lot of gear, so I took the bus to Bishop in the morning. Somehow, I had great internet service on the bus so I was able to start catching up on my blog.

I got to Bishop and went to Wilsons outfitter and bought new shoes (that hopefully won’t give me blisters like the last pair), new socks (ALL of my socks had holes in them), gloves to use with my trekking poles, a snow basket (they gave me an old, beat-up one for free), two handkerchiefs, sunglasses, and some dehydrated dinners. The staff there was friendly and helpful. Too bad they’re so far from the trail.

I had asked my Dad to book me a room, which he did. It was quite aways off the main drag, but I’m used to walking. I got there around noon, but check-in isn’t until 3. I asked what it would take to get in there now, and they said $20, so, done. Not like I’m going to sit on the curb for three hours.

I spent the next several hours updating my blog and drinking beer with my shoes and socks off. It felt really good to get caught up. Hopefully, I won’t have to go two weeks without service again.

Because, I tell ya, two weeks is a long time on the trail. It’s hard to remember that far back! I see the moon is getting full again, which means it’s coming up on two moons since I was looking up at it from my porch, full of pre-trail anxiety. It really boggles my mind to think of all the miles and experiences I’ve had and it hasn’t even been two full months yet! It seems a LOT longer to me. More like four months. It’s really amazing how small things like footsteps can add up to major miles so quickly (I’m at 788).

Not that I’ve been loafing. I’ve actually been pushing myself really hard. Just about everyone I’ve made friends with is behind me. I’m actually a pretty slow hiker. Just two days ago I passed my first hiker while on trail. Usually, I am the one getting passed while walking. But I don’t take many breaks, and I start early, so even though I’m slow, I end up hiking some big miles and my new friends fall behind. Anyway, one of the reasons I came out here is to see what kind of physical ability I still have at my advanced age (I turned 47 last week), and I think we can all agree that Adam/Glide is not quite dead yet. I’m still capable of some impressive feats. We can cross that one off the list.

Which brings me to my plans for the next leg to Mammoth. The schedule I made to meet my Dad in Tahoe says eight days, but it looks like it’s only 121 miles. I have a few 18- mile days planned, which sounds fine, but there’s some 12’s in there too. As I’m getting to know Glide, I can tell you Glide can do 12 miles by noon easy, and Glide doesn’t stop hiking at noon unless there is beer and town food. In the woods, I might take long break, but then I would want to walk some more. If these new shoes actually don’t cause me pain, potentially a lot more (I think I have “trail legs” now, but unfortunately not “trail feet”). I think hiking from 0700 to 1700 with an hour’s worth of breaks sounds pretty easy, and that’s probably around 18 miles. Frankly, there’s not much else to do. If I camped at 1600, then what?

So, I’m thinking most likely I will get to Mammoth a day early. Which is great! Because my crazy plan to hike from south of Forester all the way to Bishop kind of worked, I have a double zero here, and frankly, I am beginning to think a single zero is so crazy busy, there’s just not enough time to relax. Naturally, I’m trying not to walk much and I’m spending as much time as I can with my shoes and socks off. If I could have happy feet, I would be a happy hiker.

Except maybe not tomorrow. I went to the grocery store (way on the edge of town, at least a mile away) for resupply and maybe I should not have gone when I was hungry because I have so much food! I carefully stuffed the bear canister with everything I could fit, and what was left almost fills my food bag! 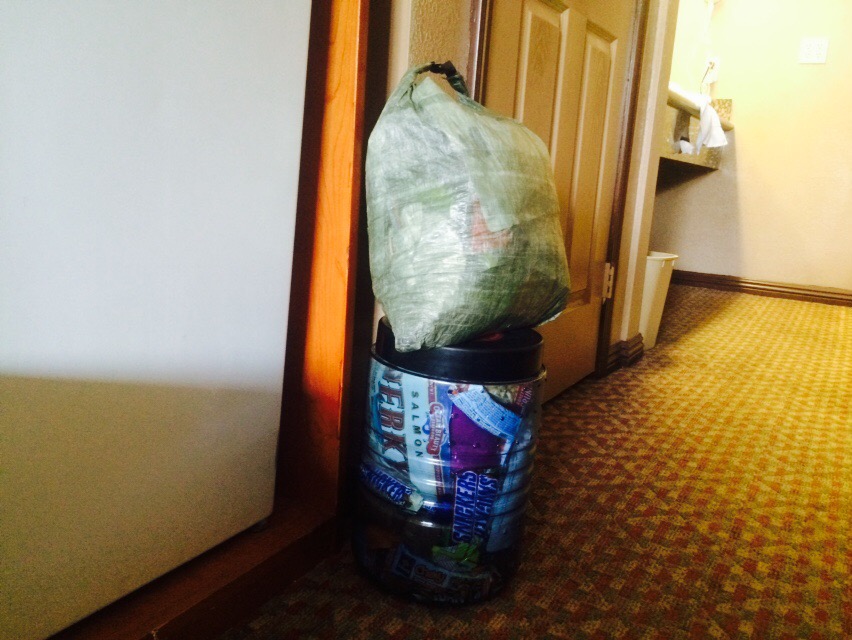 It’s probably too much food, and I’m not looking forward to carrying it, but at least I will be eating well. I also decided to keep this one pair of socks that only have one hole apiece, so I washed them in the sink. This dirt is from one pair of socks:

Anyway, the bus doesn’t run on the weekends, so I’ll be hitching 40 miles back to Independence and then up to the trailhead at Onion Valley. I’ll start early and if I can get to the trailhead by noon, I’ll be pleased. Wish me luck!

In other news, within a few hours of coming down to the desert floor, I got the nasty, bloody, nose boogers again. I haven’t had a full-on nosebleed, so that’s good, but I hope it clears up when I go back to the mountains. Also, for the last 12 hours I have had a sore throat. I hope that’s from the low humidity too, and that it also clears up when I get out of town. Whatever’s wrong with me, being out in the woods will be good for me, I think.

I should have internet service in Mammoth, so it won’t be two weeks without service again, but it will probably be a week. I hope you and me all have a good one!