Got up and out of camp around 0700. Didn’t sleep well again, tossing and turning all night. I don’t know if it was the bugs, the humming powerlines overhead, the train whistles, or all the planes. I did a little research on the rest of the trail to Wrightwood, and I was glad I did. It gave me time to contemplate the fact that there was no water between I15 and Wrightwood. I was looking at a 26 mile water carry, almost all uphill, plus one night camping (8 liters, my full capacity?). Ugh.

But the morning was pleasant, I was feeling good, and the terrain got pretty scenic, which was a nice change. For the first time on this trip I felt grateful to be out hiking the PCT. In answer to yesterday’s question, Yes, this is what I was seeking! The trail went through some crazy terrain on the way down to the highway. Here’s some pictures: 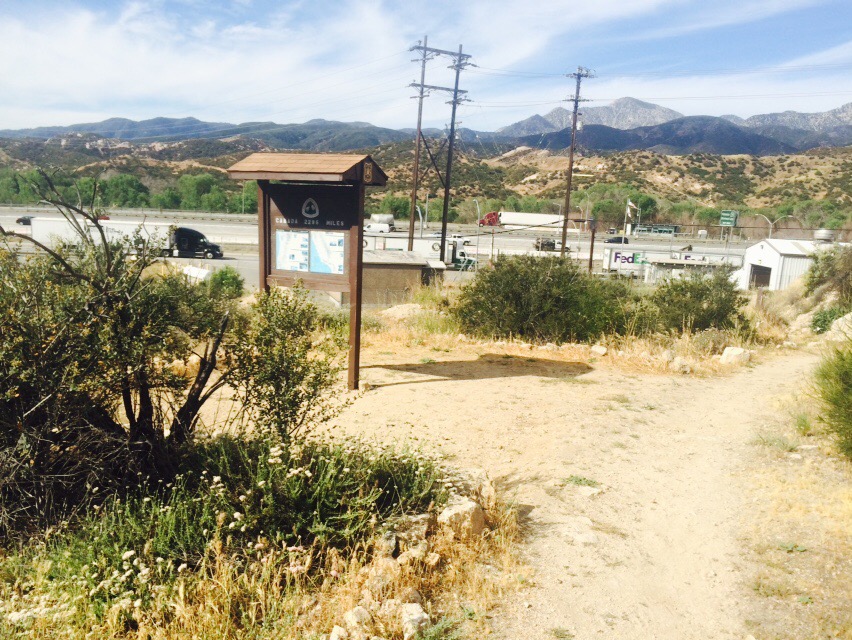 The Interstate was so loud, it sounded like a huge waterfall was around the corner, or something. I did pretty good at McDonalds, put away over 2000 calories. The bad news was, again, it was breakfast. I really wanted a cheese burger and maybe some chicken nuggets, but they only serve breakfast before 1030. I ask you, what is this world coming to when you can’t go to McDonalds at 1000 and get a cheeseburger?! Or any time of day, really.

I went to the restroom, washed up a little in the sink, and filled my water bottles and bladders.

So, I loaded up with 7 liters of water, a bottle of wine from the gas station next door (minus the bottle) and headed out to climb the hill during the heat of the day.

The first few hours were steeply uphill and super hot and I was not feeling well. I drank way over my allotted amount of water, probably from all the salt and sugar in the food. But I still made pretty good time, and it was kind of scenic.

Luckily, the trail crossed a road, and there was a water cache there. I was able to replace the two liters extra that I drank since leaving McD’s. I was really grateful, but of course it was 4+ pounds.

About 1300 I came to the real climb. Classic PCT where it’s not too steep, but it’s definitely uphill, and it goes on for like, in my case, five hours. Looks like this: 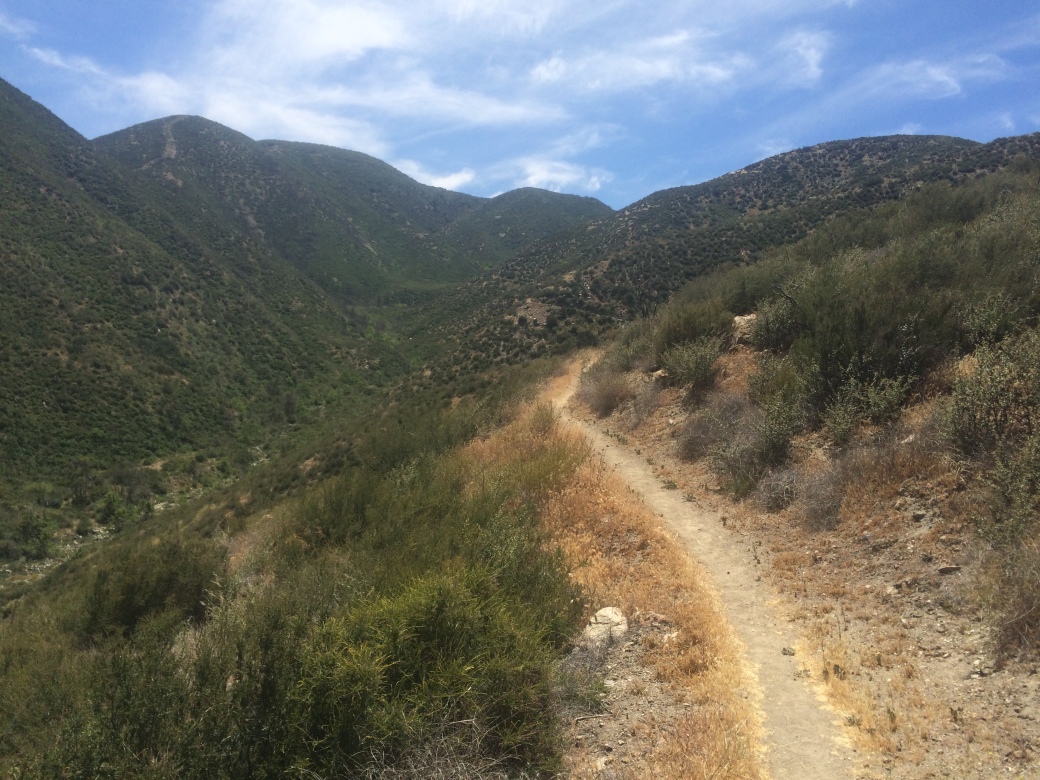 But slow and steady will get you there.

Soon I was up where it’s cooler and there was a nice breeze. I looked back and could see the mass of mountains around Mt. San Gorgonio and even San Jacinto in the far distance. Not sure if you can see it in this photo:

I started looking for a campsite around 1630, since I was already past halfway to Wildwood and up most of the elevation. I have an easy 14 miles or so tomorrow, so I should get to town in early or mid-afternoon.

I spent some time wandering off trail looking for my stealth spot. I don’t know why I don’t want to camp with other hikers, but I just don’t. After hiking all day, I just want to eat and go to bed, not necessarily in that order. I don’t really want to socialize. And I don’t want to hear people snoring or tossing and turning or getting up early, or me worrying about being quiet if I get up early. I like sleeping somewhere quiet.

I was worried that I was wasting time and tearing up my pack in the brush, but I did find a spot on this knoll with views to the east and west. It’s a bit breezy, which feels good now. Hopefully, it dies down a little after sundown, although I am low behind some bushes that take most of the wind over me. Here’s a shot from camp looking at the mountains I’ve been hiking toward all week. I’m close!

The other thing ailing me is the bug bites. Got like ten on each hand. I also have an itchy bite on my lower calf, which could only come while I was not hiking. Spider in the sleeping bag? And my foot’s been itchy. I thought it was athlete’s foot or something and then tonight I notice my foot actually has 13 distinct red marks, like insect bites:

My big toe isn’t looking too happy either.

But it was a pretty good day. My spirits were pretty high most of the day and I got about 17 miles in. I’m looking forward to town tomorrow. Maybe I can even walk there before my feet start to hurt!