I think I told you I found a spot on the ridge around sunset, dog-tired after 24 miles, and it was cold. Well, things didn’t get better. Even though I immediately inflated my pad and jumped in my bag, I was having trouble staying warm. The wind was howling.

At first I was too tired to eat, but after I had rested a bit there was no way I was sticking any part of me out of my bag, and it was pretty dark. Except, I was getting wet. Fog-drip and maybe even some fog drizzle were gradually getting me wet. Thank God I got those trash bags from the Forest Service! I put my feet in one and it came up to my belt. My feet felt a little warmer. But the wind was from over my head so it filled up like a spinnaker. That wasn’t going to work, so I got the other one, tore a breathe-hole in the bottom and pulled it over me the other direction. This covered me surprisingly well.

But it became clear pretty quickly that however much moisture wasn’t getting in, there was plenty enough moisture already inside. In order to keep my breath from adding to it, I spent the night with my face out the breathe-hole. Out in the cold.

At first I couldn’t sleep anyway because I couldn’t get comfortable. My hips and knees and feet had me changing positions every five minutes. Then, I was just cold. I don’t know how cold it got, none of my water bottles froze, but I’m sure it was 30-something. I thought the wind would die down overnight, but it increased instead. 50 mph? I never actually started to shiver, but I was cold and damp and uncomfortable all night.

I set a new record for breaking camp in the morning. Between the time I decided to get up and the time my feet hit the trail was less than eight minutes! That’s motivation. Not that I had much choice. After five minutes I couldn’t feel my fingers and they were stiff as wood. I hope that record stands for a long time. I don’t want more motivation than that!

I just wanted to hike down, out of the wind, down into the desert, but of course the PCT went up for the next two hours into the highest, foggiest, windiest ridges around. 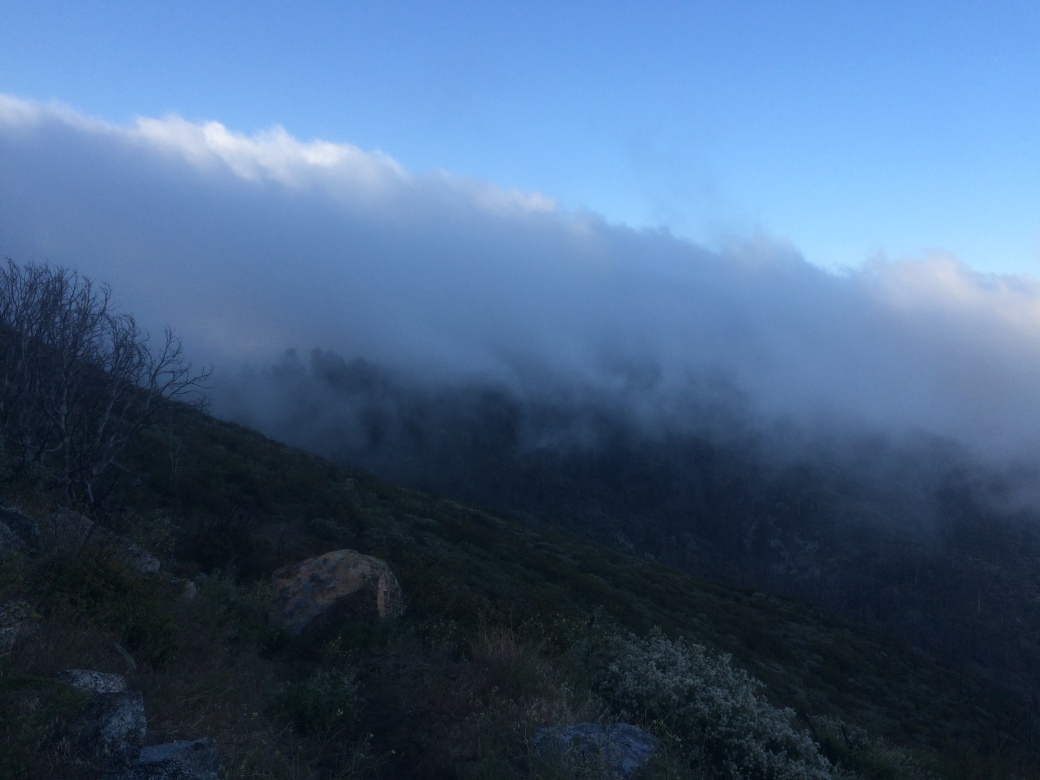 I’m over on the hill in this photo now, drying out my sleeping bag. Fifty percent chance of rain tonight. Maybe if I start off dry, it won’t be so bad? It will certainly be warmer. It’s supposed to snow tonight where I was last night. Close one!

8 thoughts on “A Horrible Night”