As you can imagine, I’ve been thinking a lot about shelter these last 24 hours. What is it? What do I need? What do I want?
Some of you may be thinking it was crazy, or even reckless, to camp at elevation in bad weather with nothing but two garbage bags for a “shelter”, and to you I can only say that you have not experienced the joys of ultra-light hiking.

Ultra-light means that you KNOW you don’t have everything you might need. You might need to improvise, make good use of what nature can provide, and yes, possibly suffer a little for a few hours when things aren’t good. Isn’t that part of it? A little suffering here and there? And the flip side is, your pack is much lighter! People “pack their fears”. Apparently, I’m not afraid of sleeping outside with no comforts.

But I tend to agree with what you’re probably thinking. Especially considering where I’m going, two trash bags is a little too light. I think I will want more than that in the Sierra. But I’m torn between trying to work out the ultra-light system that works for me, which I know I could totally figure out over the next 2000 miles, and just biting the bullet and having my tent mailed back to me. I hate to carry a tent if I’m only going to use it once every two weeks, every pound on the back makes a huge difference, but I guess it all depends on the weather. I will have to research this in Tehachapi and make a decision about the Sierra.

Anyway, the hike down from my drying out spot to the KOA near Acton was uneventful. 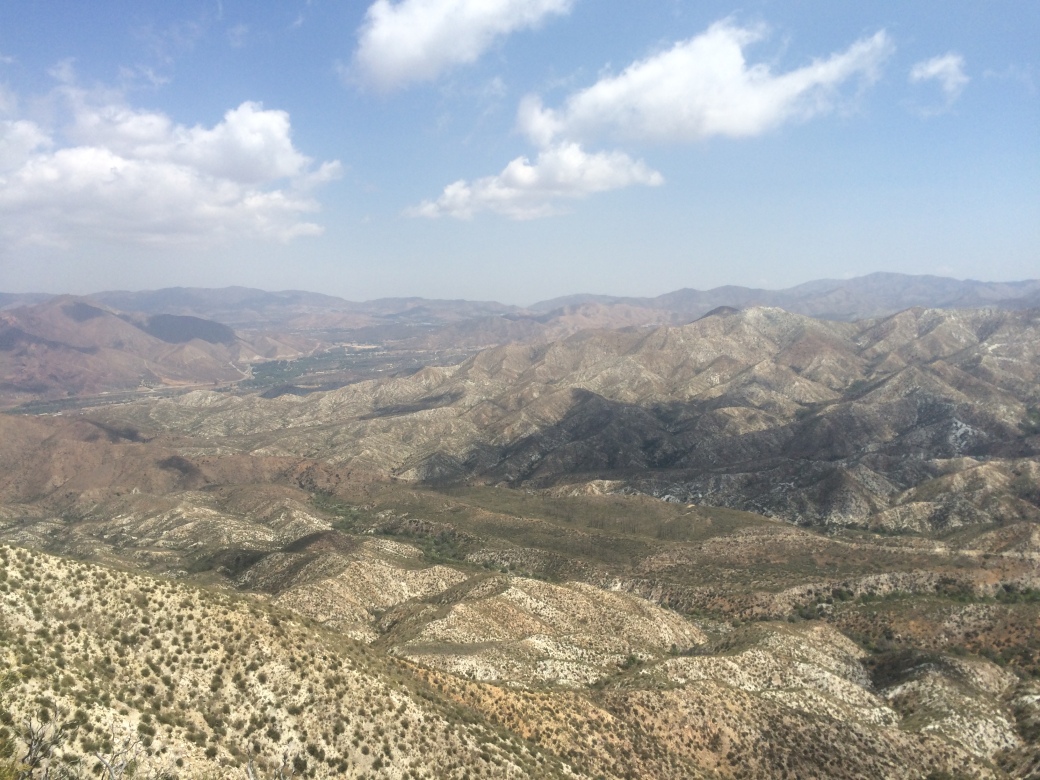 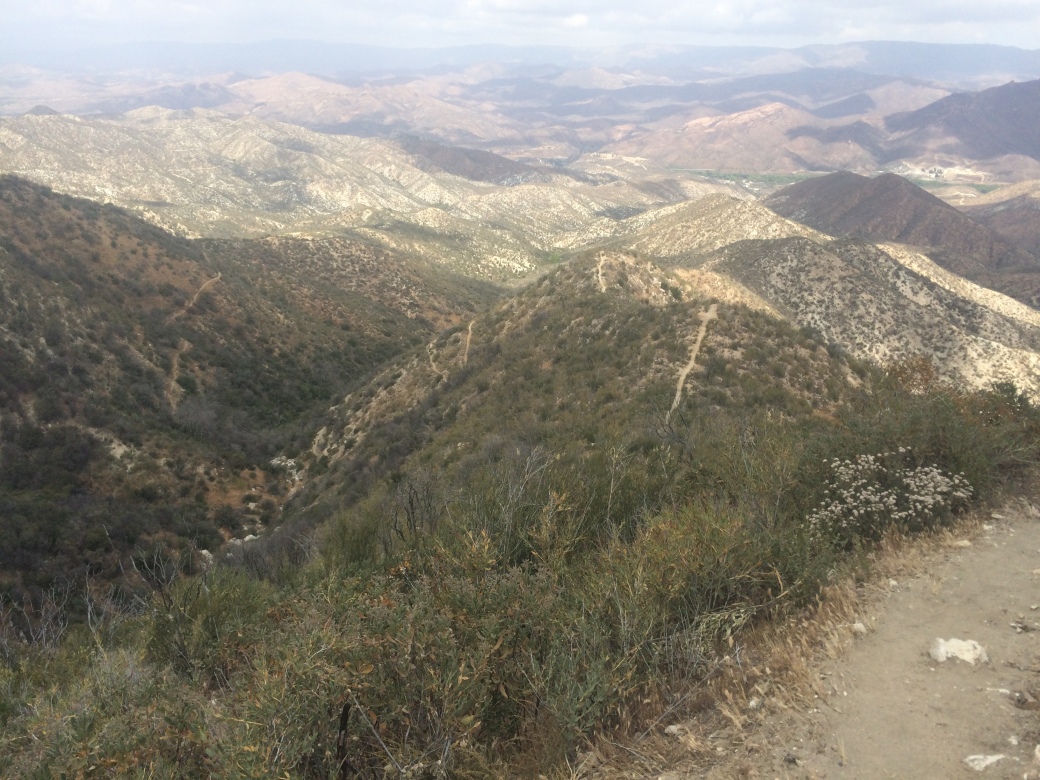 See the trail? Bottom right, then down the ridge, switchbacks down and out of the valley to the left?

I got there a little after three, immediately ordered a pizza and beer and was happy by four. I also looked through the hiker boxes and found a tarp (once bitten, twice shy). This was a huge industrial tarp like you throw over your boat or something. I cut a six by ten foot section out, which weighs over a pound, but I have a more substantial shelter now.

We hikers had this nice warm room to hang out in, and the forecast was for rain (snow above 5000 feet), but the only place to camp there for all the PCT hikers (20?) was this little patch of grass. Yes, that’s what earplugs are for, and I have those, but I heard about this railroad crossing, and I had seen a nice creek verge walking in, so after the beer was done, I walked out of the campground around six, looking to camp. And soon, because it was starting to rain in earnest. My umbrella kept me dry until I found it. The perfect train bridge/shelter! Totally dry, all my own, nice clean sandy floor with no garbage or litter. It was about four feet high and eight feet wide. So perfect! I was very pleased with myself. 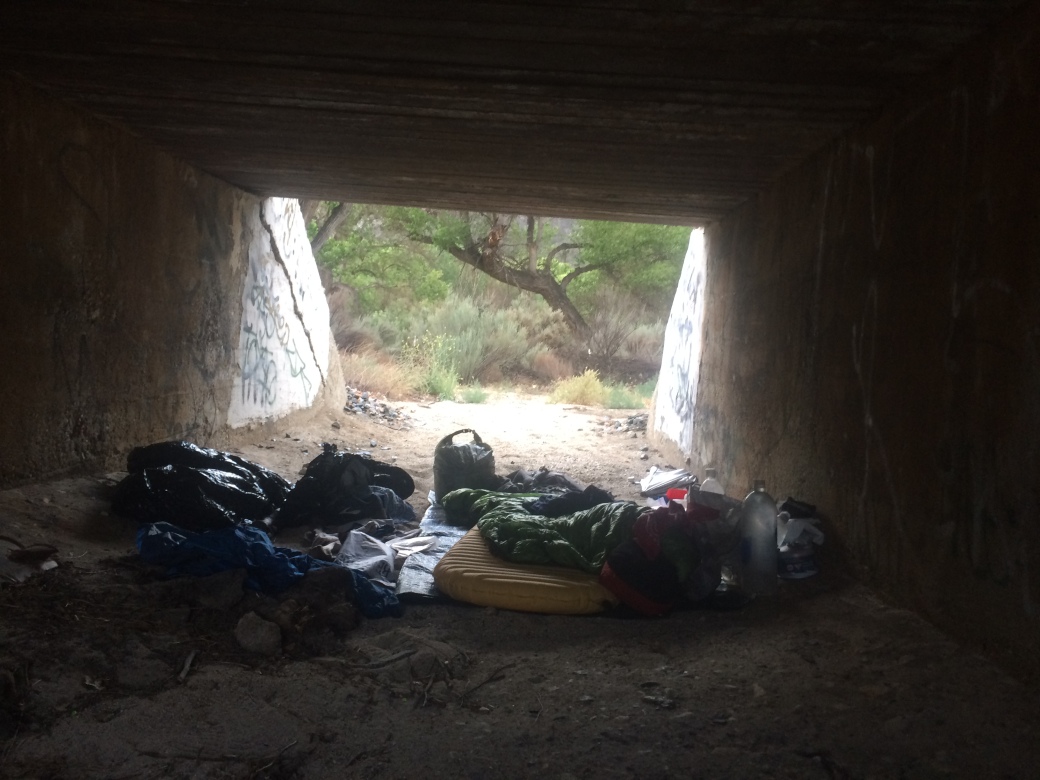 You probably can’t see or hear the rain in that photo, but it was a beautiful moment. Turns out it’s mostly a commuter line, so there was only one freight train all night, and that was actually pretty cool being so close to such power and feeling so safe. I’ve seen The Fugitive! Yeah, I trolled that bridge and it was a awesome!

I thought the PCT went by my front door, but it turned ten feet before me. Here’s a shot from the trail when I hit the road at six: 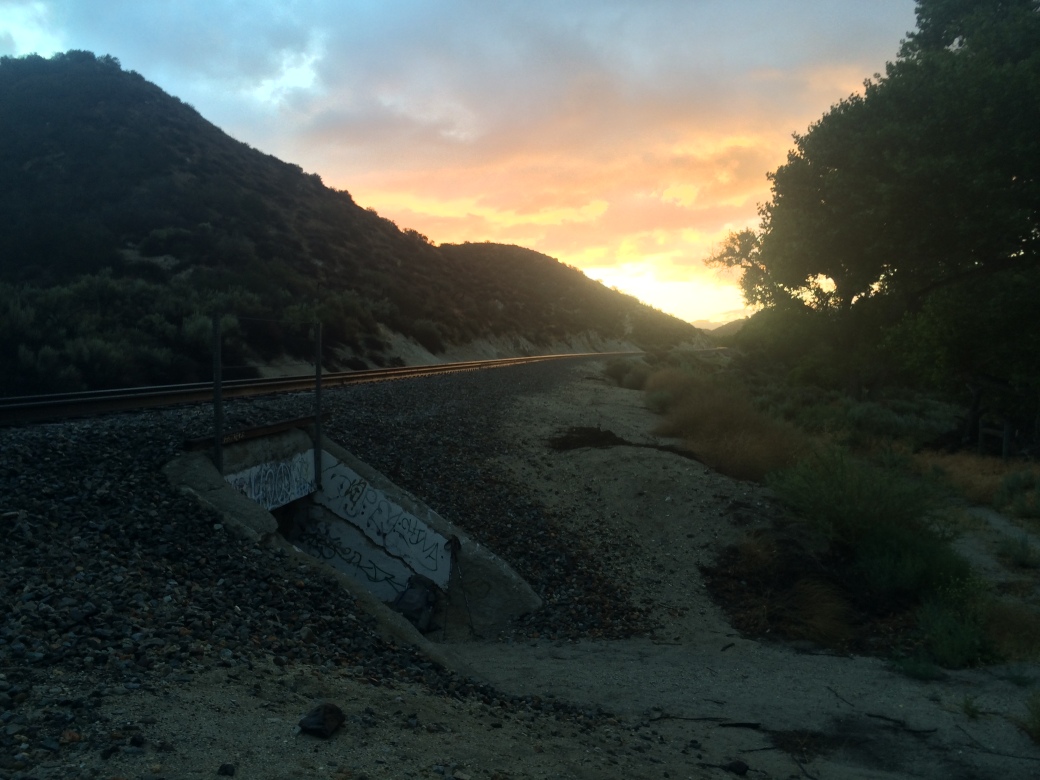 So, I slept great, and was so happy not to be getting wet out on the lawn with everybody else. Being a troll rocks! But what is all this camping gear? Huge tarp? Totally not needed. The shelter thing is giving me a lot to think about. Stay tuned.

Anyway, out of there by six and hiked through some nice country: 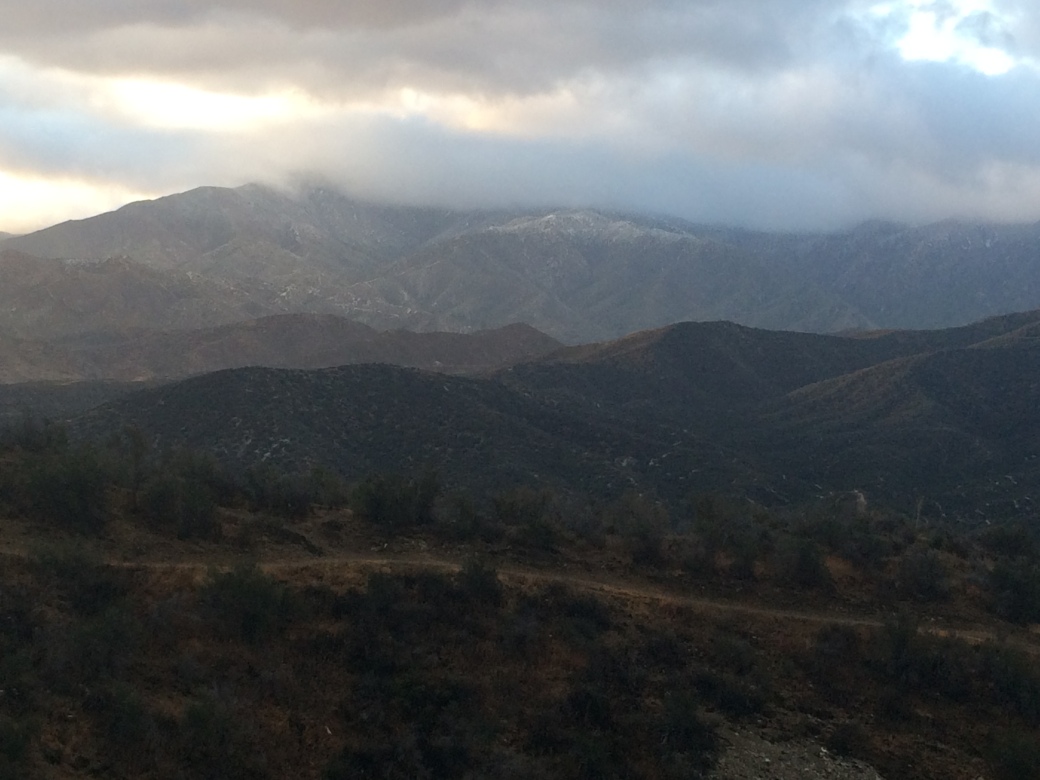 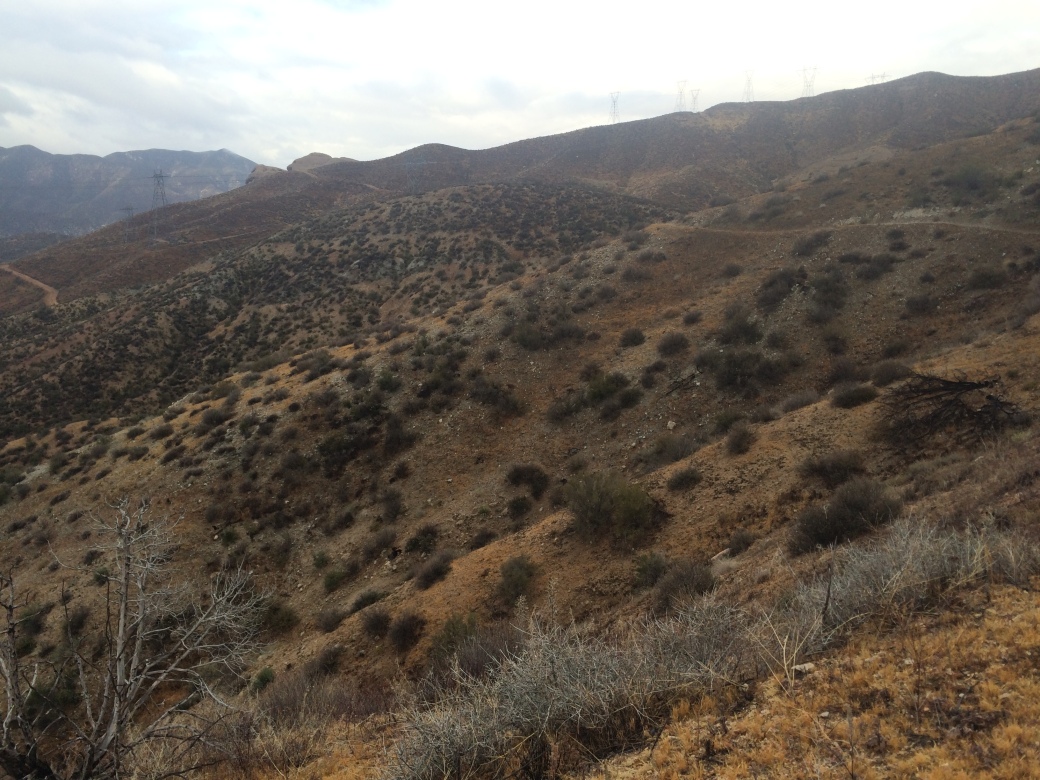 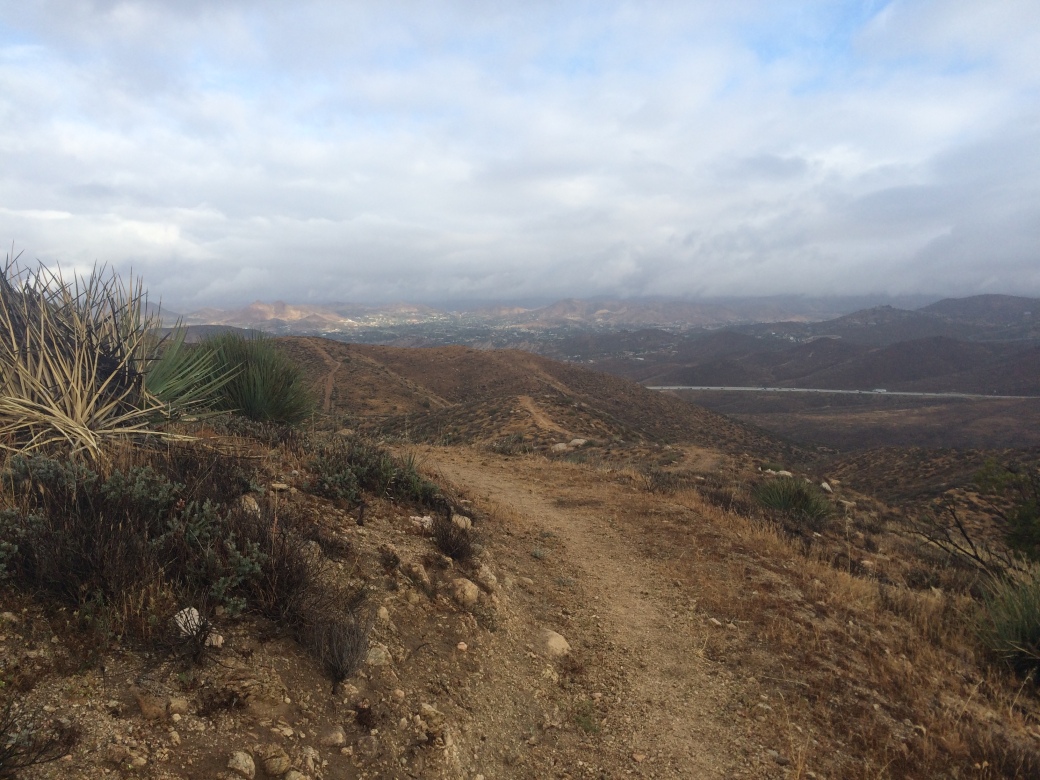 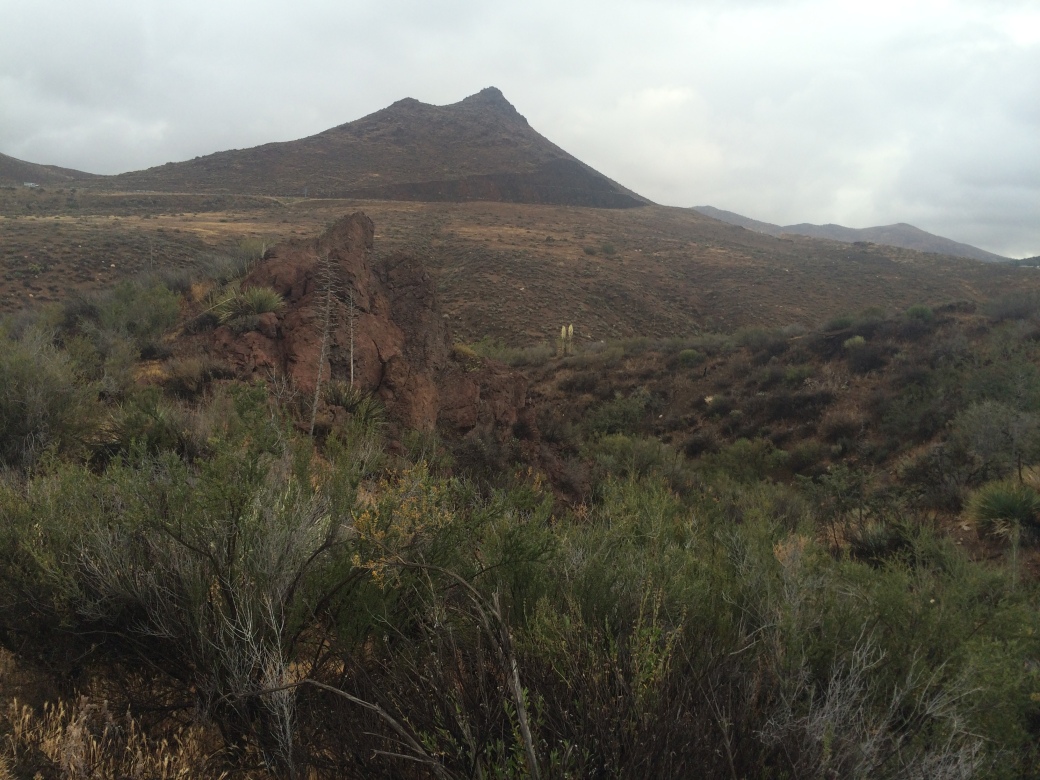 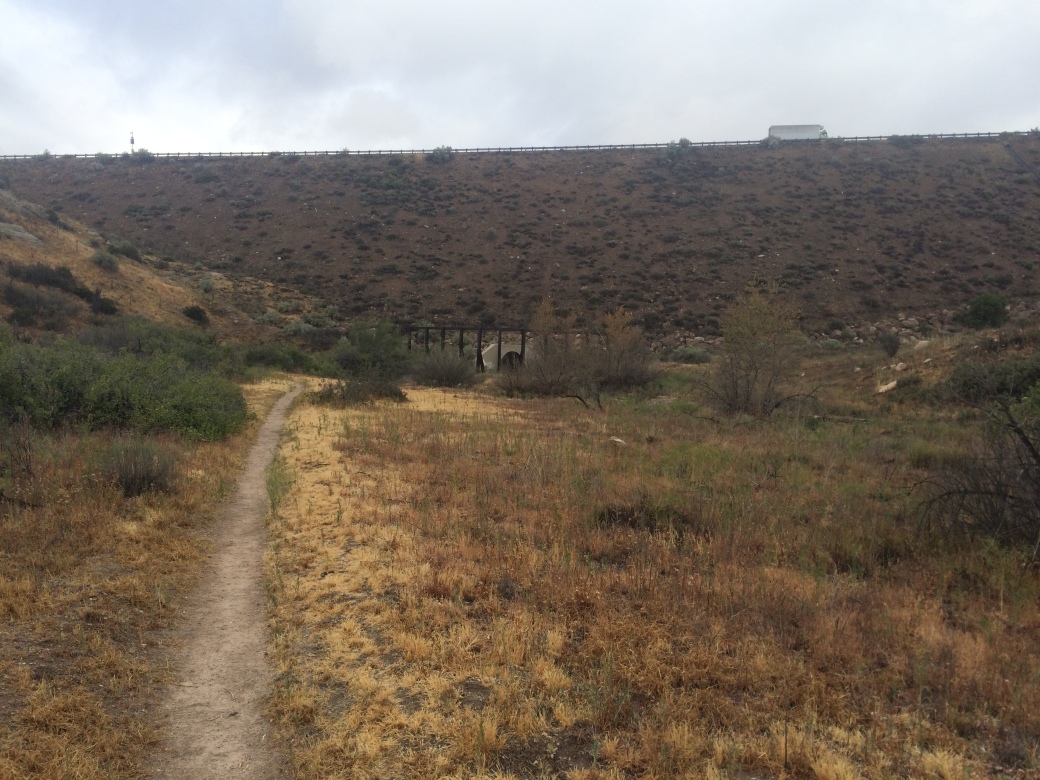 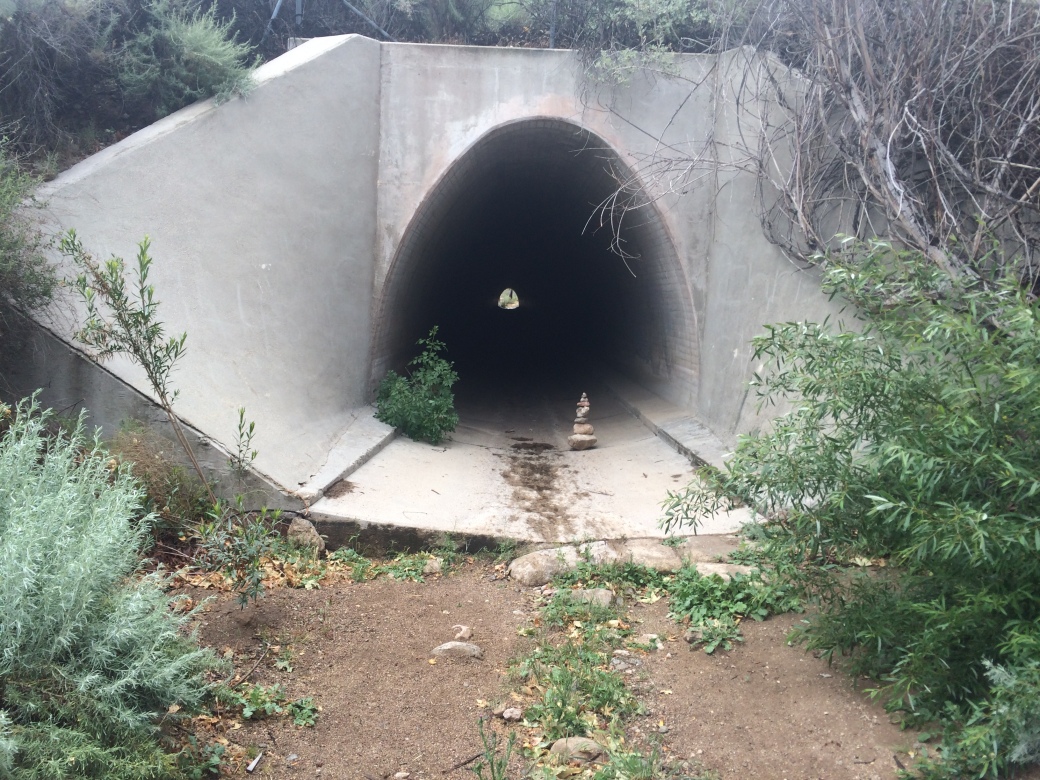 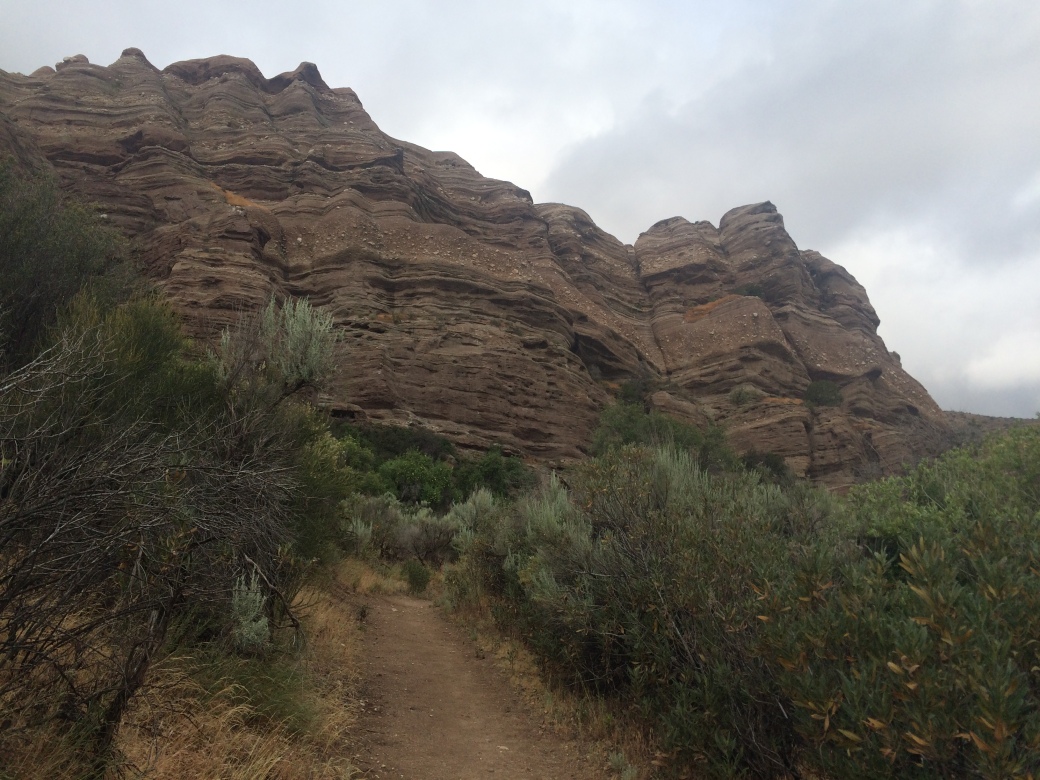 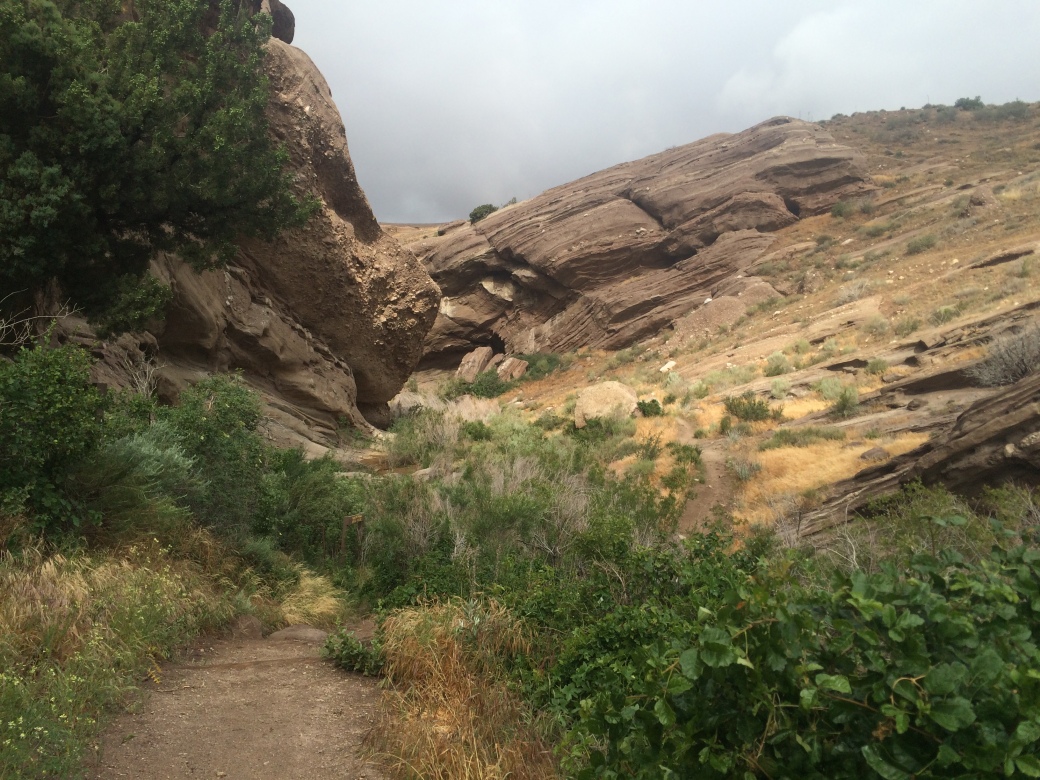 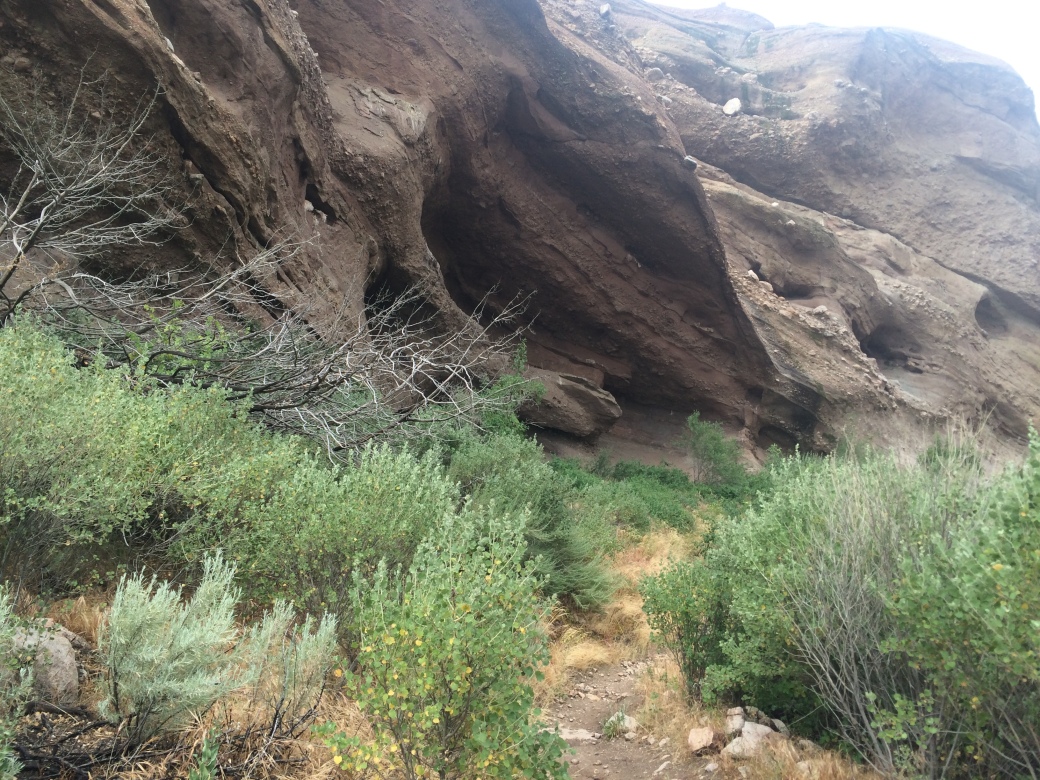 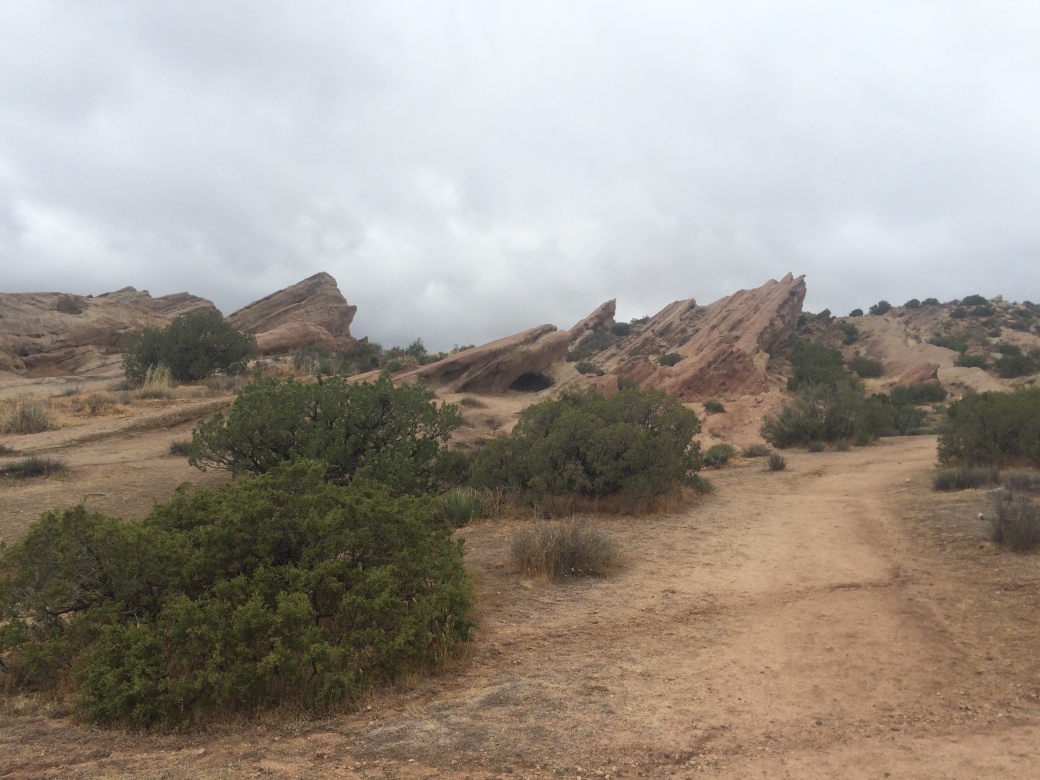 The Trail went right through the town of Aqua Dulce so I stopped at the market and got some cheese and whiskey. Overcast, 50 something degrees, occasional light rain. Perfect hiking weather for a Humboldt boy. I think I have 8 more miles to hike today. 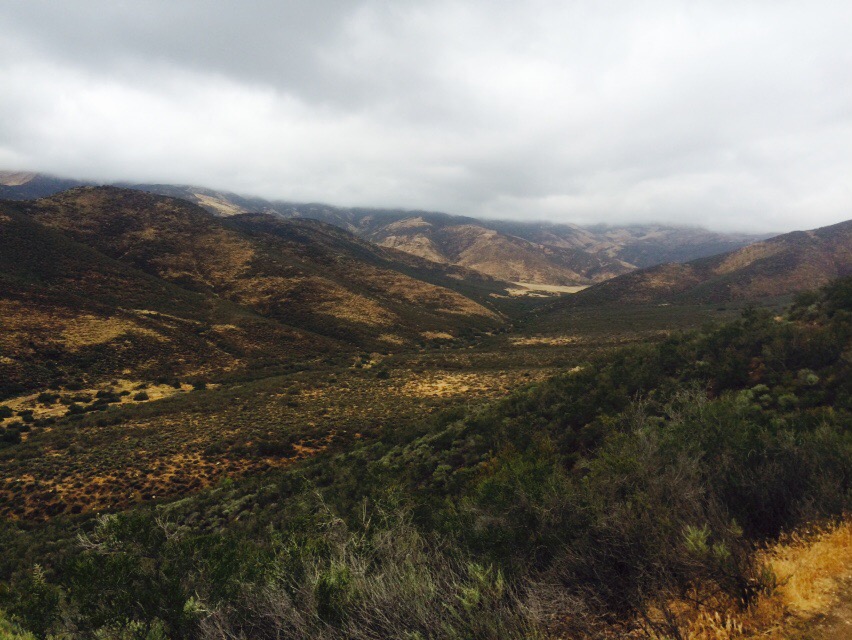 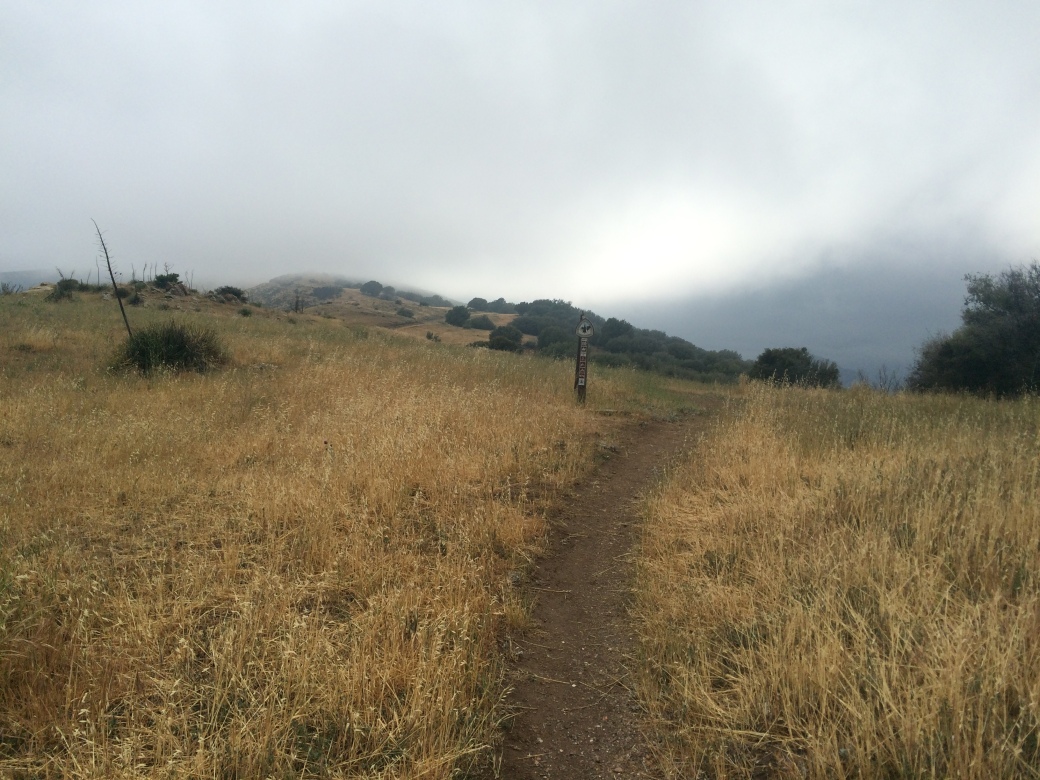 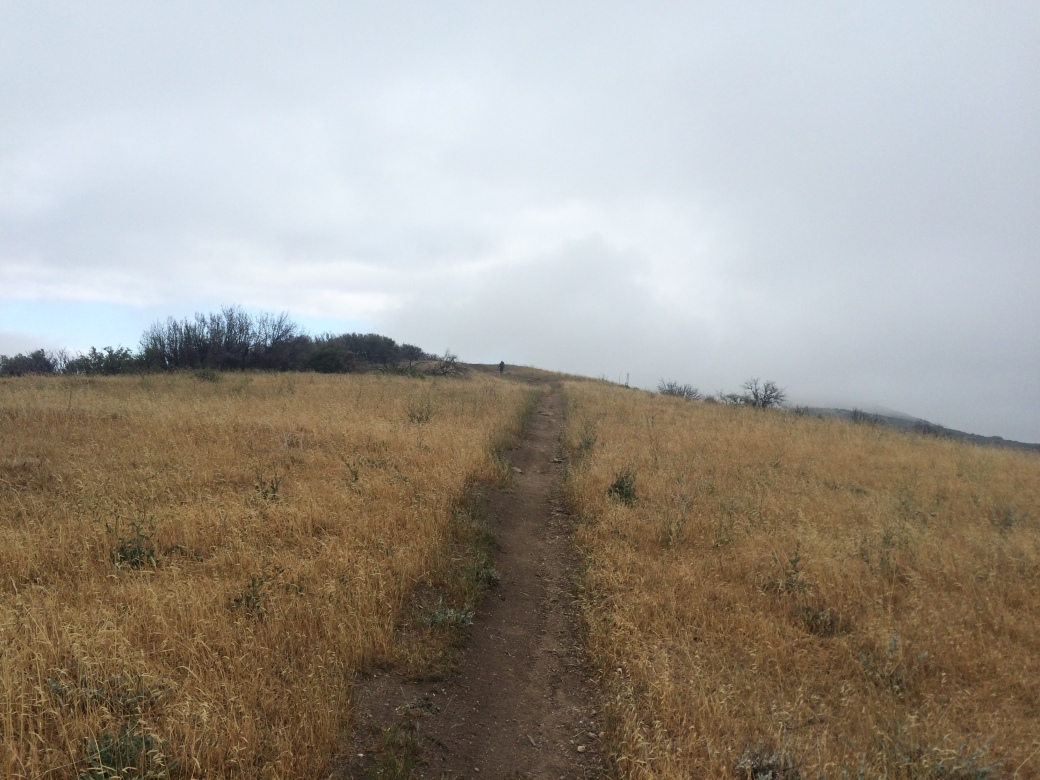 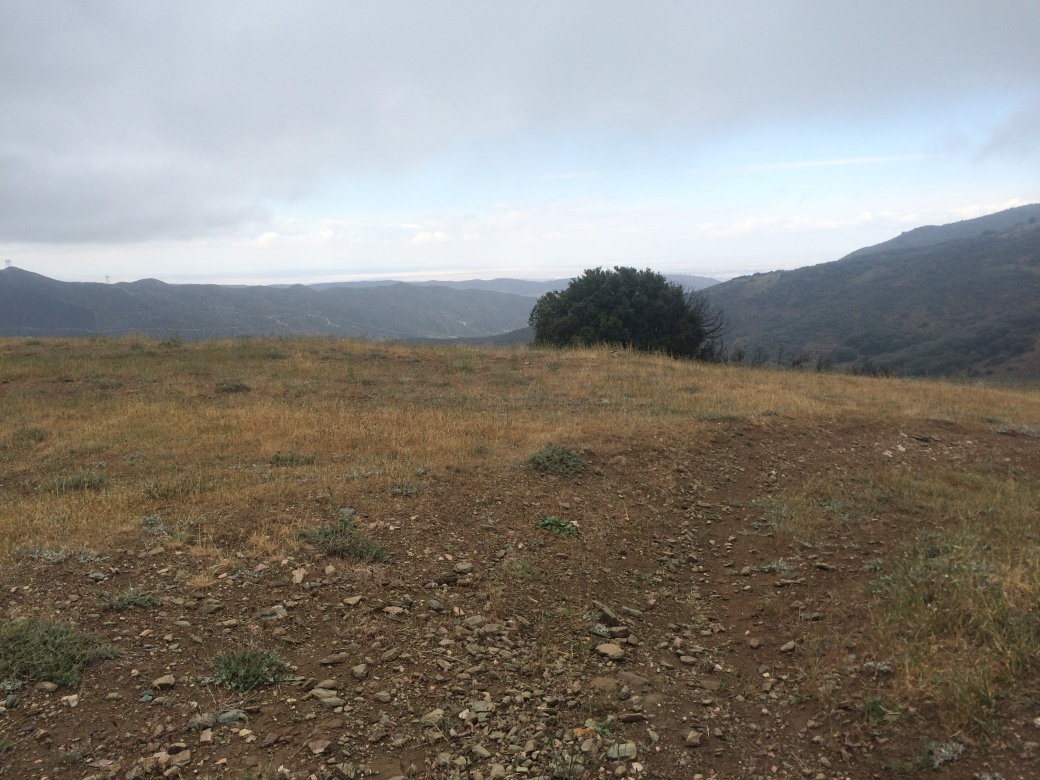