Couldn’t sleep and had company all night (woodrat?). Hit the trail by 0550 and made it to Walker Pass by 0815. There was Trail Magic! 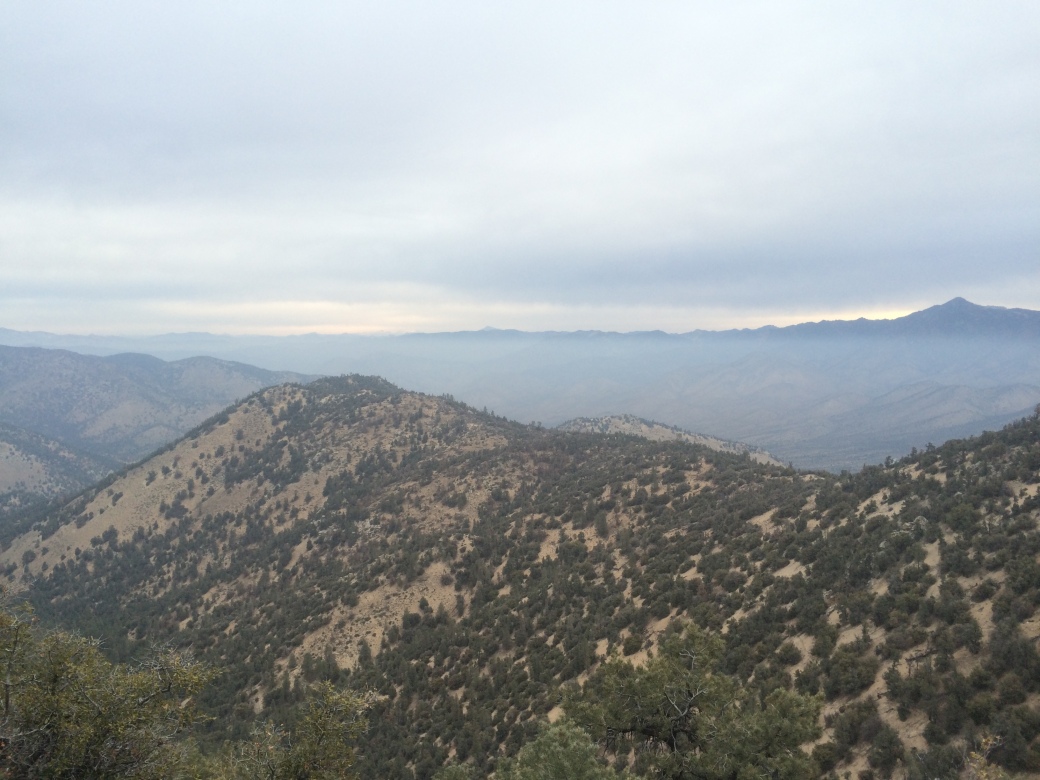 I fell today. I figured I would somewhere on a 2660 mile hike, but trekking poles are really good at preventing that. Of course, I didn’t have them deployed when I fell. It was a downhill stretch and I wanted some water. I’ve got the move down now, take the straps off, both poles tucked under the left arm, reach around to the side pocket on the right, drink, put the bottle back and rock on.

Somehow, while I was trying to put the bottle back in its pocket, my foot hit something and I went down. I did a face-plant into the trail and got caught by a sage bush overlooking a steep drop. My water bottle went skittering down the trail.

Somehow, I was completely unhurt. I collected myself, my water bottle, and kept walking. It was a good “wake-up call” to be more careful. I know there’s a lot of places coming up where doing a face-plant into the trail will get me seriously hurt.

At the Trail Magic at Walker Pass I met a hiker named “Goat”. He had a heavy Middle Eastern or East European accent (although he actually hails from Phoenix, AZ), and we hit it off like peas and carrots. He felt free to tell me at first he thought I was rude because I passed him on the trail (around 0615, he was cowboying right on the trail) and he said, “Good morning”, and I didn’t say anything. I explained that I had said “Good morning” but I used my “the sun isn’t up yet voice” and he just didn’t hear me. So, it’s all good.

I also passed CatWater a little later, although she was up and social. We talked about why cats like to drink really cold water, naturally. She didn’t fess up, but I found out later that, unlike the dead rodent water that I drank, she had drank from a source that had just had a dead bobcat fished out of it, hence the CatWater. You have to be careful early in the hike what kind of Trail Name you get. Although actually, I love it and am a little jealous.

I ate two small breakfast burritos and a pastry at the trail magic. I could have eaten a lot more, but I was still grateful since I seem to be low on food. Thank you Twinkle Toes! I filled my water, dumped my trash, and got back on the trail by 0850.

I felt pretty good today. The usual pains came and went. After Walker Pass the mountains seemed to get bigger, and the trail is much more steeply up and down. But I cruised. 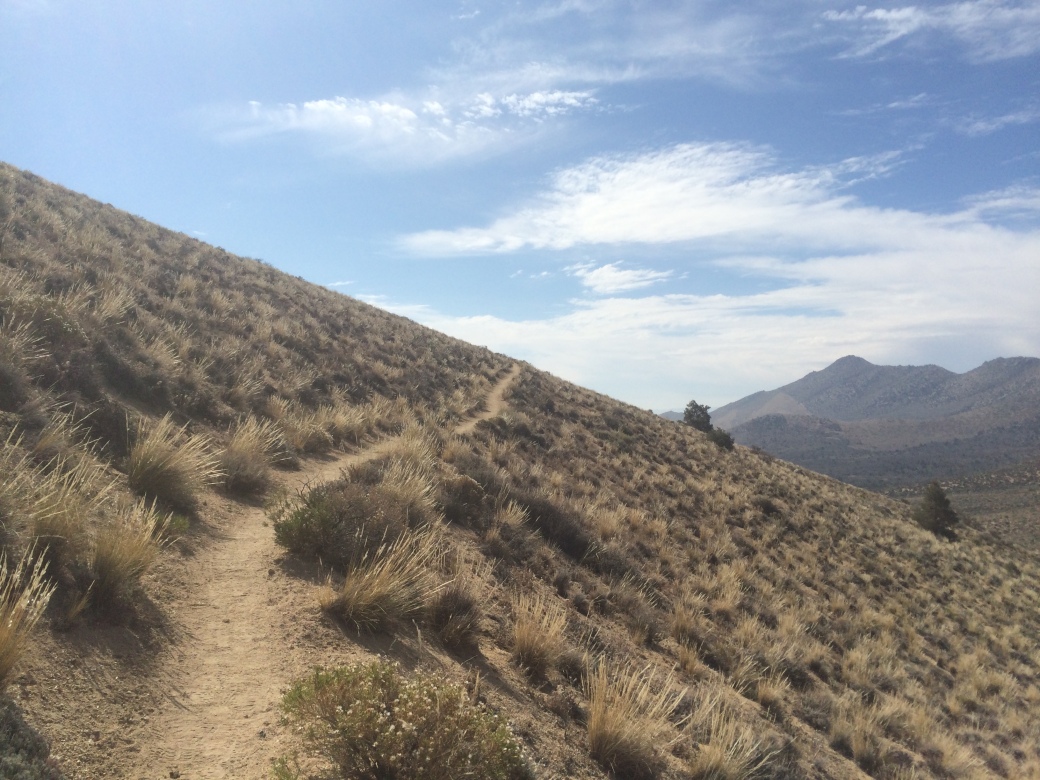 I got to a nice view spot and stopped for lunch at this cool ring of wood that people had stacked up. To block the wind? It made a great structure to hang my stuff out to dry. Goat caught up to me and I was able to give him some First Aid supplies for his poor feet (in exchange for an orange). He’s planning to hike fast, so I may not see him again. 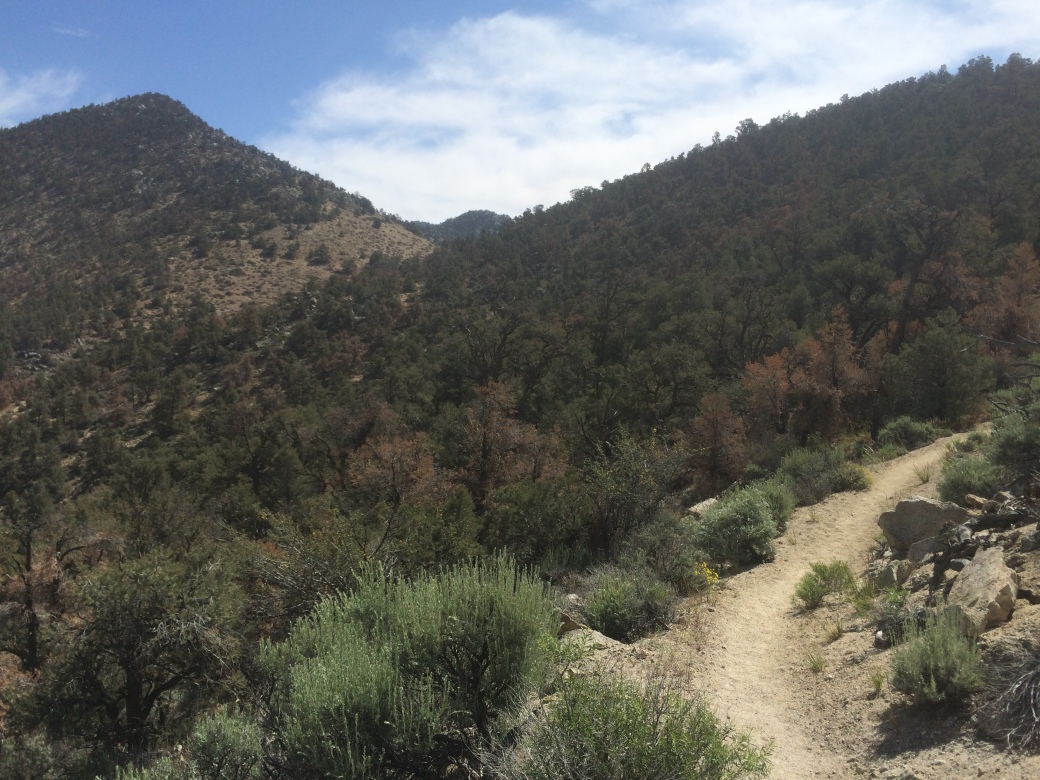 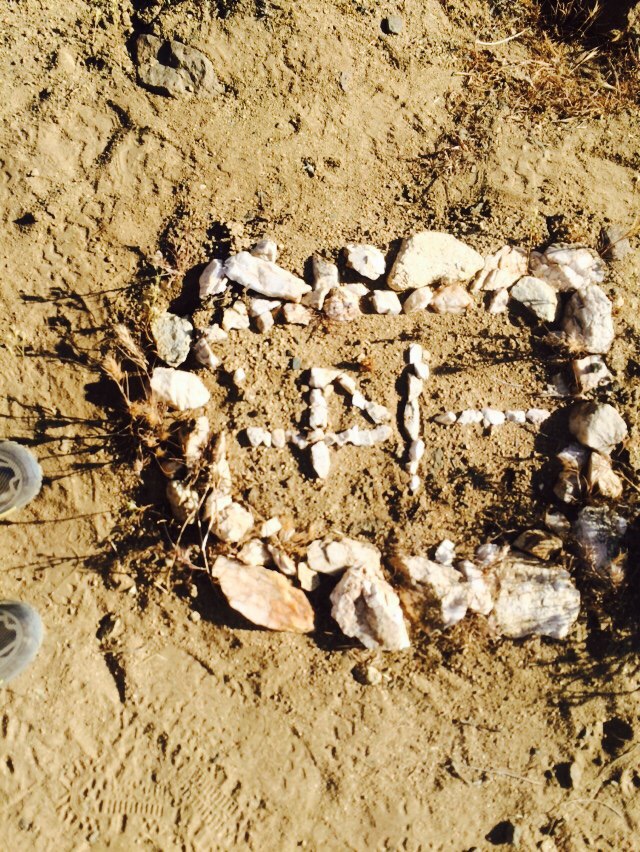 I got four liters of water from Joshua Tree Spring (the radioactive one with the lurking bear), and it would have been a nice place to camp, but I didn’t have my 20 in, and it was only 1630. The trail was solid uphill, but I felt uncommonly good, even with the water weight. Once again there was nowhere to camp, but I made do on this little knob, which turned out awesome except for the stickers and burrs. It had a perfect leaning rock with a view to the west. 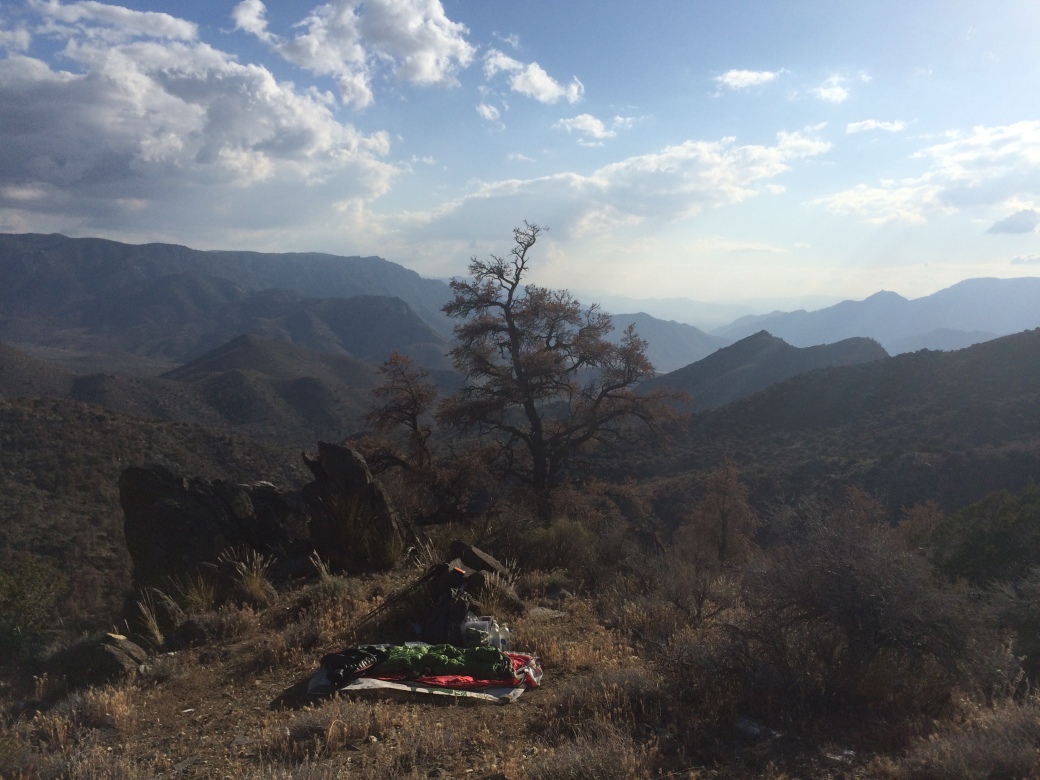 I think I felt good today because of the change in scenery, and because my pack was so light (very little food and not too much water). Also, I saw very few people. Apparently people are skipping the “hard” parts. Hmmm… 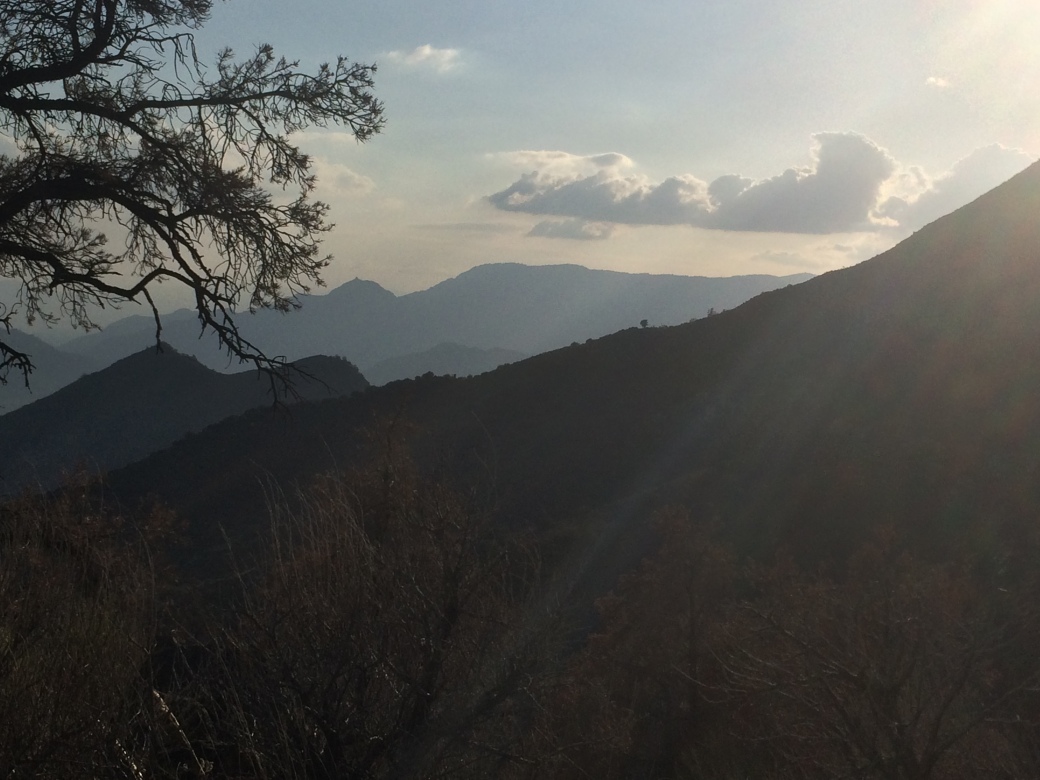 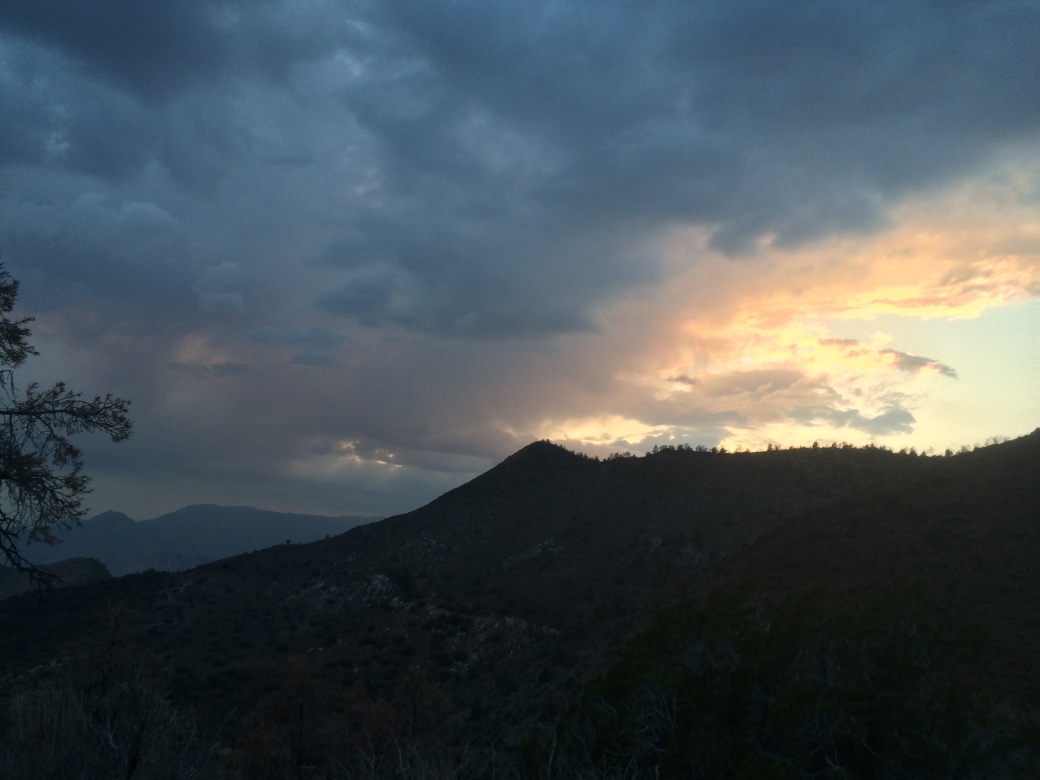